So, let’s be perfectly honest – Microsoft Office, arguably the most renowned and familiar of office software, is still pretty unassuming. Being so pristine, functional and clean isn’t always a barrel of laughs, and it would seem that Office’s developers were aware of this themselves. Over the years, these procrastinating programmers have slipped some oddities into Microsoft’s popular software – some cute, some funny, and one in particular being a little… creepy.

Excel 97’s Flight Sim
What’s almost as exciting as an Excel ’97 spreadsheet? If you answered “the power of flight”, it would appear that Excel 97’s developers agree with you, as they built a surreal flight simulator into their popular spreadsheet software. By following a very specific set of instructions, Excel would launch a simple, neon-coloured landscape in which users had freedom of flight, steering via the mouse and controlling thrusters via left and right clicks. Presumably coded during a time when the developers had little better to do, it was likely discovered when a bored office worker found himself in much the same position. 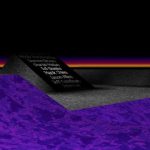 Word 97’s Pinball
Word 97 throws any pretence of usefulness or productivity out of the window (pun intended) with this pinball game. The instructions for uncovering this little distraction are a little easier than some previous entries, but then the included pinball game is equally simplistic. It’s a poor alternative for a full-on pinball table sat in the staff room, but a good alternative for those who prefer to keep their pinball wizardry clandestine.

Excel 95’s “Hall of Souls”
Easily the creepiest entry on this list, Excel 95’s Hall of Souls is hidden behind a secret method within Excel 95. Presumably an in-joke from some of Microsoft’s more dark-humoured developers, it’s accessed by pulling off some very specific manoeuvres within Excel. In a new page, selecting the entirety of row 95, highlighting Cell B, and opening the Help/About page would load up the tech support page. Holding down Ctrl+Alt+Shift and clicking on the “Tech Support” button would open the titular hall in a small window.
The hall itself is a 3D maze that the user can navigate, eventually leading to a room full of developer portraits. The secretive nature of this little easter egg, the surrealism of the hall itself, and its inclusion in the otherwise innocuous Excel 95 only lend to its unsettling presence. Perhaps it’s best that we’ve not returned there for the past 22 years, hey?

Access 97’s Magic 8 Ball
Much like the Excel flight sim and the Hall of Souls, the ‘Magic 8-Ball’ trick is hidden behind a very specific set of commands, this time in Microsoft Access. Tinker awhile in the Macro editor, and you can create a Magic 8-Ball Button that ‘answers’ your questions about the future*.
*Please Note: Neither Microsoft nor its affiliates can be held responsible for any disastrous consequences arising from the 8-Ball’s advice. 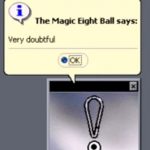 Excel 2000’s “Dev Hunter”
Another sneaky developer tribute, Dev Hunter is part credits sequence, part remake of the classic 80’s arcade game Spy Hunter. Once again accessed via a strict sequence of commands, Dev Hunter sees the player… I mean, the hard working employee… zipping down a motorway with developer names painted on the tarmac, knocking hapless drivers out of the way in pursuit of the enemy – or at least, a stern word from a disapproving boss. 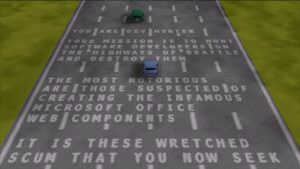 …But What about Modern Office Software?
Sadly, as most of these secrets are exclusive to their decades-old software, they can’t be replicated in modern Office packages. Furthermore, it looks like we won’t be seeing these, or any others, for a while; Microsoft’s “Trustworthy Computing” initiative, a business integrity move designed to combat security problems for windows, is believed to eliminate the possibility of these secrets sneaking their way back in again.

Nonetheless, they remain a fascinating insight into the development process of our most-used software. Here’s hoping that Microsoft can find a way to revisit this tradition in future – or, more specifically, that millions of us Office users can.

If you prefer programmes that won’t distract you from your work, here’s NovaLoca’s Best Free Apps for Workplace Efficiency.