10 of the most striking places to work in the world!

Previously we  have looked at some of the unique offices from around the world. Creating an aesthetically pleasing work place with quirky features is becoming increasingly prevalent, but the first impression of any building is the outside. If you are expecting clients to visit, having an externally pleasing work place could be vital.

As a bit of Friday fun we’ve looked at ten of the most striking work place buildings from around the world, including the headquarters of some global brands and some smaller niche brands, all with clever building aesthetics.

Bar codes can be found on everything we own and everything we purchase. This shopping centre in St Petersburg took this to the next level and is designed as a giant red bar code. If the designers Vitruvius and Sons were looking for an attention grabbing exterior, then they certainly succeeded.

Once the tallest buildings in the world, The Petronas Towers are the headquarters of the Malaysian oil and gas company Petronas. Designed by Argentine American architect Cesar Pelli, the buildings stand at 452 meters and are connected by The Skybridge. 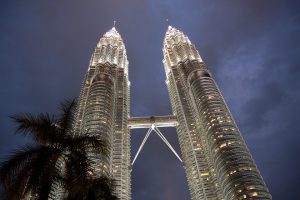 Can you guess what The Longaberger Company produce? The building opened in 1997 as the home of this American maker of handcrafted maple wood baskets.

Situated on the outskirts of Madrid, this office is not aimed at making a grand impression, but more on tapping into nature as a form of creativity. Surrounded all year round by colour and wildlife, is there a better way to inspire brilliant thinking?

Completed in 1972, the German giant’s headquarters are exemplified by the cylindrical offices which channel a car engine. The clever design stands over a building topped by a giant BMW logo, so there really is no mistaking over whose headquarters it is.

Constructed in 1984 as a shopping centre for children, it is not only the outside that is strawberry themed, as the inside is just as sickly sweet as the exterior.

Not only a fascinating shape, but marvellous on the inside as well. Opened in 2011, the laces building is Adidas’s research and development headquarters and makes for a stunning aerial view.

How do you make a library more appealing? How about presenting the exterior as a giant bookcase? The bookshelf was completed in 2004 and features the spines of 22 titles of varying style and interests.

Opened in 2007 to coincide with the first ever Formula One Abu Dhabi Grand Prix, the Yas Hotel is pure luxury and beautifully changes colour. And when the Formula One is in town, it becomes a set piece for the race, with the track veering underneath part of the hotel.

The 87 storey skyscraper is located in London and is currently the tallest building in the European Union. The levels are home to a number of businesses, all looking out across the city. Like the Petronas Towers, not one for vertigo sufferers. 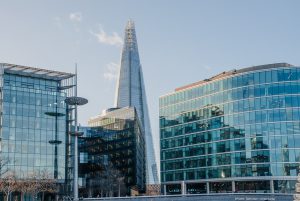 Do you know of any other unique buildings or business headquarters? How would you feel about working at one of these unique locations?